OK, let’s jump right in. I had a chance to test out Google Glass last week. I have to admit, I can’t remember the last time I wanted to try a new device as much as Google Glass. The first thing I noticed about Glass is that there is an unprecedented amount of Buzz surrounding its existence. Everyone was staring, asking questions, pointing, and snapping pictures. It’s as if, someone had sat with every person in my vicinity five minutes before and explained to everyone that “In a few minutes, there will be a man wearing something on his face that represents the future. You are going to want to take pictures because you won’t get another chance”. 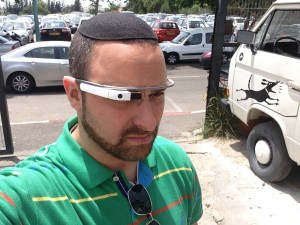 That excitement was not reserved exclusively for the offline world. I shared the pictures of me trying Glass (some of which you can see) on the various social networks and again, people were truly excited, or at the very least, extremely curious.

I gotta admit, while the thought of Glass excited me before trying it, I expected a very raw and non-polished experience that would provide a glimpse into the future of computing but is, by no means, ready for the present. I was wrong.

Yes, Google Glass is by far the most futuristic device I have ever used (worn?) but here’s the thing. I would definitely use Glass regularly in its current state. So what is so awesome about a device that you wear on your face and that makes you look like a complete dork?

Well, you see, Glass flies! (bumper sticker material?) The thing moves so fast and is so responsive to both touch and voice, that I literally couldn’t believe how fast it was snapping pictures, searching the web, or sharing content on Google+. The use-case is dead obvious. Everything we use technology for nowadays ends up getting lost because of delays. You want to snap a picture of your kid? Take out your camera, fire it up, then take the shot. Good luck catching the cute look that was on his face when you first had the idea to take a picture. With Glass, it’s “Take a picture” and consider the picture taken!

Now, don’t get me wrong, Google Glass has some evolving to do, both in terms of the product, and more importantly, the price. No chance of this thing going mainstream with a $1,500 price tag. Obviously, Google realizes that and this is just a prototype. The thing is, the level of polish, the experience of this prototype does indeed get me super excited about the possibilities of wearable computing in the immediate future.

There are of course skeptics, who fear the implications of Google Glass on our privacy. There are those that fear the use of this type of device for advertising. And there are those that take their concerns one step further and think such a trend is bad for humanity and our social interactions. They are all wrong and trying Google Glass should take care of all those concerns.

It is not a privacy hazard any more than a camera or a computer is. Google has already announced there will be no third party ads on Glass. As for the third group of people, I believe those same concerns were voiced about mobile phones and social networks. Get over it, the world is moving forward, not backward.

As for Glass itself, the device is light, very light. To the extent that after a few minutes, you almost forget it is there. The actual screen that you see, the interface, is hard to describe in words but the closest thing to compare it to is a hologram. That is what it kept reminding me of. A hologram that is projected right in front of my face and with which I can easily interact. I don’t know, the whole thing was just unlike anything else I have experienced.

All in all, I am extremely impressed with what Google did here and for once, the insane buzz it has created, is well deserved.  I would agree that Google Glass represents the future of computing, but I think the future is now.