A few days ago I was fortunate enough to receive a nice surprise from Nokia, their flagship Maemo mobile device, the Nokia N900. To be honest, I had lowered my expectations for the device as a result of a friend’s opinion, who told me I was not going to like the phone. Before I get into details about the phone with all its shortcomings and industry-leading features and specifications, let me just state in one sentence that overall I am extremely pleased with the device and pleasantly surprised by its endless capabilities. 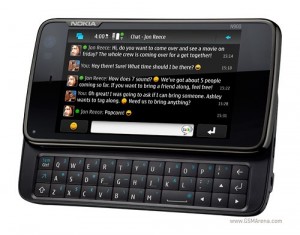 My first impressions of the N900 as soon as I unboxed (who made up that word anyway?) it was “Oh man, this thing is bigger than I thought”. The phone is 18mm thick, which compared to the iPhone’s 12.3mm is pretty darn thick. In terms of its height and width, it is smaller than the iPhone, but still bigger than the average phone on the market. As soon as I powered up the device, my reservations about its size were forgotten. Upon seeing the nice Nokia introduction, I was immediately extremely impressed with the phone’s screen, which compared to a Bold and an iPhone seemed a whole lot clearer and more vibrant to me.

As soon as the phone is completely up and running, the OS presents you with a nice intro and small lesson on how to use the phone. This phone is so cool that even setting the time was an experience like no other. However, and this is a huge disadvantage, the difference between the Nokia’s resistive touch screen and the iPhone or Nexus‘ capacitive screens was felt immediately and in a huge way. The one thing that leaves me scratching my head about this phone is why Nokia would not use a capacitive touch screen in such a ground breaking device. Just a small explanation; resistive screens are kinda last generation and were originally engineered to work with a stylus and not a finger, whereas a capacitive screen like the one on the iPhone and most Android devices are meant to work with fingers. Having said that, the N900’s resistive touch screen is almost completely finger compatible since the Maemo icons are large and easy to press. In the last three days, I think I have taken out the stylus maybe twice.

At this point, let me just clarify that the reason I chose to compare this device to the iPhone is that there is no denying the iPhone’s popularity and the widespread opinion that it is in fact the most advanced mobile platform on the planet. I could not help but think “How does this feature compare to the iPhone?” every time I discovered something new or missing on the N900. So, putting the Android/iPhone/BlackBerry debate aside, I chose to compare the N900 to Apple’s mobile device. Having said that, it should be emphasized that the two phones are extremely different in their specifications, philosophies, and user bases.

So before I talk about how the N900 ups the iPhone, let me just list a few examples of things the iPhone has that the N900 is missing. For starters, the size, as mentioned above, is a huge factor. After all, you are going to be carrying this device around, and the N900 might save you a few trips to the gym it is so heavy, but at least it will get you into shape, right? Moving along, the screens cannot be compared. I liked the iPhone’s screen and its responsive nature better than the Nexus’, but the N900’s resistive screen does not even compete with the Nexus in this department. I found myself pressing on icons multiple times on multiple occasions.

Another thing some people might say the iPhone has over the N900 is its interface, which is polished and intuitive, but I have to disagree. I do not disagree about the iPhone’s UI, but rather with the claim that the N900 or more accurately the Maemo 5 UI is “half baked”. I think it all comes down to the kind of user who would be utilizing the UI and an N900 user wants a powerful multi tasking beast of a phone, which is precisely what the interface provides. Perhaps, the addition of a single hardware Home button would have been a blessed initiative, but as a whole I get the concept of Maemo and how one is supposed to use it. Was it as short of a learning curve as the first time I used an iPhone? No it wasn’t, but after a few hours, I was flying through the phone like I had been using it for years. It takes some time getting used to and a small shift in the way we have used mobile interfaces, but once you get a hang of it, the possibilities are endless.

So, now for the meat of this article. The N900 is truly everything the iPhone is not. What do I mean? Well, at the end of the day, I, and many millions of people like me, do not use an iPhone. I find that for the way I use my mobile device, the iPhone wouldn’t be able to keep up. So where do I start? Here is a list of ten things the N900 and the Maemo OS do incredibly well and are sadly missing from the iPhone OS.

In conclusion, I will say that I am extremely impressed with the N900 on almost all fronts and I truly believe that Meamo should be the future of Nokia devices. I must emphasize though, that it is not a device for everyone due to its size and somewhat complex interface. Let’s just sum it up by saying that compared to Symbian, this phone is a revolution, and if Nokia takes this size step ahead with Maemo 6, the next iPhone better step up its game if Apple wants to even compete. Nokia, some people in the US might not know, is still the number one manufacturer in the world, and for a while there, I did not understand why or how they reached that level, but with the N900 and its endless potential, it all becomes very clear again that Nokia is here to stay for the long run.