Listen, I have no intention of starting an iOS vs Android debate here so if that is why you opened this article, allow me to introduce you to the little X in the corner… I use an iPhone 5S as my daily phone and until recently, there was no way I was going to replace that with an Android device.

Yes, I am fully aware that some of the newer Android flagship devices are more impressive than the iPhone, in both personality and looks, but for me, despite many MANY attempts, I stuck with iPhone. I have played with the Nexus 5. I have even played with the HTC M8. Fantastic devices, as are some of the others like the S5 and the LG G2.

For me, I always returned to the iPhone mainly due to one single missing feature in Android, a decent notification system. You see, Android users will claim that their notifications are less intrusive than the iPhone’s. In fact, they will tell you that Apple actually stole their notification system from Android. In many senses, they are correct. Then again, if I had a dime for everything Android borrowed from Apple, I would be able to buy both companies and force them to kiss and make up… 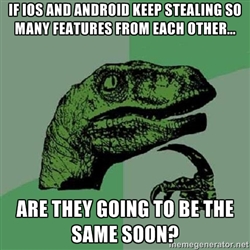 So what does the Android notification lack that the iPhone does not? Immediacy. Picture the following scenario that happens to me ten times a day. You are in a meeting and you get an email/tweet/fb message/WhatsApp ping/etc. On Android, you pick up the device, turn the screen on, slide down the notification tray, and decide what to do. Meanwhile, the person you are sitting with has left, gotten home, changed into something more comfortable and prepared a three course meal for himself.

You know what us iPhone users have to do in the same scenario in order to decide whether to read the message or ignore it? You sitting down? They have to…

Look at their phone! That’s it. Yes, the iPhone lock screen lights up and displays the new message for you to view it and decide how to respond if at all. How is that so difficult? And yet, despite many attempts at Android hacks, apps, and tweaks, there is no way to have the Android device turn on the screen for five seconds when a new notification comes in and show it to me without me touching my phone once. Till now.

Now to be fair, I have yet to test Android L, but after reading up on it and watching the reviews, like the one below, it seems Google put a lot of effort into the notification system of Android L. I, for one, am quite excited about that since the HTC M8 keeps appearing to me in my dreams. That is normal, right?

Anyway, enjoy the video below from MKBHD, one of my favorite YouTubers. As for me, I will wait till iOS 8 is out and run a side by side comparison to Android L before making this life-altering decision. I am such a geek.