Since chances are you are here reading this as a result of the title, I will give you the bottom line. The Samsung Galaxy Tab is an all around fantastic tablet that would serve you loyally as a Web surfing, music listening, video watching, and app exploring device. But let’s be honest, that is not what you want to know. You want to know how the Samsung Galaxy Tab compares to the iPad so I will address that. Would I replace my iPad 3g with a Samsung Galaxy Tab? No, but not for the reasons you are thinking. To understand what I mean, you are going to have to read on.

iPad or Galaxy Tab: The Basics

OK now back to the basics, when I received the Galaxy Tab in the mail from Samsung (there is my disclosure for ya), I was very excited because I had heard a lot about the device and overall, people were happy with it. The Galaxy Tab is also (or it was at the time) the only Android tablet that even remotely interested me as a user. The thing is, this review is not 100% complete because I have been using a T-Mobile Samsung Galaxy Tab, which is locked and does not support my SIM card. At least I think it is locked, either way, I use an iPhone 4 so I do not have a SIM card to even try it with, only a Micro SIM. Oh well… What that means is that I have been testing the Tab mainly from my home and not on the go.

I did bring the Tab out with me a few times but was then limited to using non-Web based features such as games or other apps but the Web did not work without Wifi. This is an important point since it is difficult to get the full experience of a tablet, especially one as ultra portable as the Samsung Galaxy Tab, without mobile connectivity that allows me to be always connected. 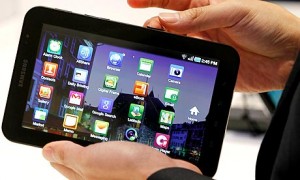 The Web surfing on the Samsung Galaxy Tab for example is more than adequate despite its smaller size screen. Watching videos on the Tab however, is better than smartphones, which is what I compare it to in the video category, but does not even approach the iPad video experience. 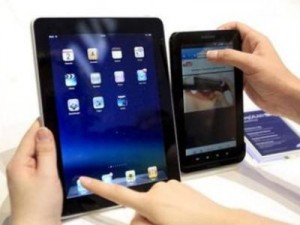 Apps? Well, this is the kicker. The apps on the Samsung Galaxy Tab work for the most part. Yes, I know, Android 2.2 aka Froyo was not designed for Tablets, but you know what? The difference between a 4.3′ display, which can be found on multiple Android devices, and a 7 incher is not that significant. What I mean is that if you take an app designed and developed for a 3.5″ screen, chances are it is not going to look too hot on a 9.7′ screen. If you need proof, try using the iPhone Facebook app on an iPad. It is not a fun experience. However, Angry Birds on the Samsung Galaxy Tab is as esthetically pleasing and highly addictive as it is on a Nexus One.

Here is the thing with the Samsung Galaxy Tab and Android as a whole. It is nice, no scratch that, it is really nice, but it still lacks polish. What do I mean? Call me a fanboy, you won’t be the first or last person to call me that, but in iOS, despite the disadvantages of a “closed” platform, everything makes sense. Not so in Android and definitely not so in the layer added to the Samsung Galaxy Tab by Samsung. To just name a few examples and let me emphasize up front, most people would not care about this but I am a UI junkie and inconsistencies bother me to no end, let’s talk a little bit about scrolling. 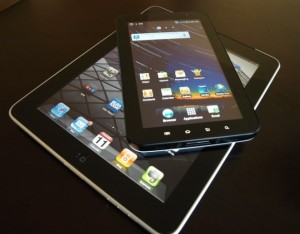 On the various iOS devices, it is pretty obvious and intuitive, you can swipe left and right between home screens and view all your apps. You will eventually reach the “end” of the screens and then you will need to go back by swiping in the other direction. So if you went all the way left, you will now need to swipe all the way right to get back. Now let’s take a look at the Samsung Galaxy Tab. If you are on the home screen, you are good, swiping left and right will enable you to go between home screens and just like in iOS, you will eventually reach the end and then need to retrace your steps to go back. Now click on Applications, same concept, left and right swiping, but with a slight twist. It loops!

That means you can keep going left and at no point will you reach the end, it just keeps going in circles. Pretty simple and possibly even more intuitive than iOS, but why the inconsistency? Either make the screens loop or make them not loop. That is what I call a lack of polish. You know why this problem exists? Simply because Android is an open sourced platform, which means anyone who wants, can take the code and modify it, and that is exactly what Samsung did.

In most cases, Samsung did a fabulous job making the overall experience of the Samsung Galaxy Tab an enjoyable one but remember, this is Samsung’s version, there is also an HTC version, a Motorola version, a Dell version and the list goes on. Does this really make the experience better for users or does it confuse them? 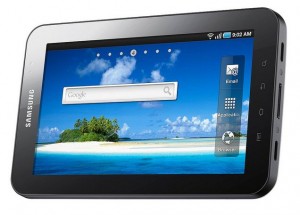 To name one more UI annoyance that is actually an Android thing, not a Samsung addition, let’s talk a little about moving icons around. On iPad, if you have an icon of an app in the bottom right corner of your screen, and let’s just say you are interested in moving it to the top left corner, the process could not be more obvious or basic. You press the icon and then drag it to the desired location. You know what happens to the icon that is in that location? It moves because it knows you want to put something there in its place. Genius. Now try that on Android. Take an app from one place and drag it to replace an app in another. No can do. You need to manually free up that spot by moving all the apps on that screen one spot to the right. Why does that make any sense from a user experience standpoint? (not a rhetorical question, I would love an answer.)

OK, so I am sure you are thinking that I am nitpicking and you are right, I am. The reason is because at the end of the day, the Samsung Galaxy Tab would make 99% of its users ecstatically happy. It is an all around solid device both hardware and software and I am loving the attention it attracts when in public. It always goes something like this:

Me: “Thanks, but this is not an iPad”

Person: “Yea, I thought it looked a little smaller than the one I bought my grandmother last month, what is that?”

Me: “A Samsung Galaxy Tab. It is a tablet made by Samsung and it uses the operating system made by Google called Android.”

Person: “Sounds good, have a nice day” , as he/she leaves with an extremely confused look on his/her face.

Why did I pain you with sharing the entire conversation that I had countless times over the last few weeks since I started reviewing the Tab? The answer is that the Tab has not yet reached the mainstream and I am doubtful that it will. Android, as a whole continues to gain market share and now, with new low end Android phones coming out, it will no longer be a platform for geeks. However, when it comes to tablets, which as an industry is still pretty exclusive for geeks, Android is far behind.

iOS and Android for the Normal Person

Here is the bottom line. Why is the iPad synonymous with tablets the way the iPod was with music player a few years back? I believe the answer is two fold. First and foremost, I believe Apple offers simplicity in its devices the way Android will never be able to. Why do I say never? Because Apple makes the hardware and software so they are meant to work together from day one. It is for this reason that Android users cannot stop going on about the Nexus One and the new Nexus S. These two phones are pure Android and are optimized for the Android OS. Unlike other phones that are made by HTC, Samsung, Motorola and others, and the Android OS is simply added as an after thought.

Putting simplicity aside for a second and at the risk of sounding cliché, many people will still prefer the iPad for a different reason, its apps. If you ask me why I would not give up my iPad for a Samsung Galaxy Tab, I would tell you it is not because of the UI inconsistencies, I can handle those given the advantages of having such an open platform (apps can access almost all the guts of the Android infrastructure, not so on Apple). For me, it is not the simplicity either, I am a geek and like complicated things. The bottom line is, I have well over 200 apps on my iPad and that is after I deleted hundreds that did not impress me. I cannot even think of something I would want to do on my iPad that I do not have an app for. 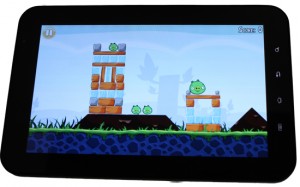 It did not used to be this way and there were many shortcomings such as watching movies not reformatted for iOS but VLC solved that. I am not going to give other examples of fantastic iOS apps, because the list is never ending. The point is, the apps found in the Apple App Store are still in my opinion far superior to those found in the Android Market in both quantity and quality. That for me, is a deal breaker when it comes to the Galaxy Tab. I am not even going to address the mess that is the Android Market but again, an open platform that supports widgets, addons, and shortcuts, means by definition that the market will be a little less orderly.

If you are still reading, well congratulations, you, like me, are a true geek, but here is the conclusion you want to read. The Samsung Galaxy Tab is an impressive device on all fronts. The fact that it has not one but two cameras, it supports Adobe Flash, has deep Google integration, and has a beautiful and vibrant 7″ display making it portable and fun to carry around, makes this device a definite winner in my book. Should you buy it? Yes. Should you replace your iPad with a Samsung Galaxy Tab? For most people, I would say no, but there are certain use cases that would enjoy the extra perks of the Samsung Galaxy Tab over the polish of the iPad. Where does the future lay for these two platforms when it comes to tablet devices? Well, we can expect to see a highly improved iPad 2 in the coming months, and we have already seen some extremely impressive Android tablets on video so we can expect this space to heat up. Add the RIM Playbook and the HP Slate to that mixer and you have yourself a recipe for some hot competition.  I don’t know about you but I am pretty excited for tablets to become the new netbook/laptop.

As always, I would love to hear your comments and thoughts about the Samsung Galaxy Tab, the iPad, the tablet industry and the eternal question of iPhone vs. Android. Leave a comment below or reach out to me on Twitter.

16 thoughts on “Samsung Galaxy Tab VS. The iPad: The Bottom Line”