Twitter usage on mobile phones is exploding in popularity.  According to comScore, Twitter usage over mobile has grown almost 350% in the last year alone.  Unsurprisingly, mobile Twitter apps have begun sprouting up like mushrooms.  With so many choices, it can be confusing to figure out which Twitter app is best for you and your phone.  To get you sorted, we’ve put together a list of our top 5 favorite mobile Twitter apps.

TweetDeck is a free Twitter app for the iPhone.  It resembles and syncs nicely with the popular desktop version of TweetDeck.  It’s a sharp looking app that includes multiple account management, geo-tagging and photo uploading.  Unfortunately, TweetDeck only supports the iPhone, which accounts for less than 2% of all mobile phones!   What about the other 4 billion mobile subscribers who don’t own an iPhone? 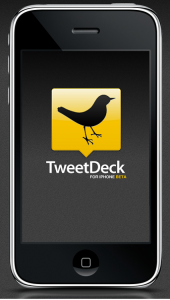 For the 4 billion people that don’t own an iPhone, Snaptu offers a free Twitter app that supports pretty much every mobile phone.  The list of features will satisfy even the most hardcore Tweetaholic.  And it works fast.   Twitter is one of several apps you get when you download Snaptu.  Basically, Snaptu is one app that includes many other apps (like Twitter, Facebook, TechCrunch, Flickr, etc).  Snaptu enables any phone to have an “iPhone-like” interface and to support iPhone-like apps.  It works well on high-end smartphones, but also on old and low-end phones.  Snaptu just announced that it has raised funding from Sequoia Capital, a VC that funded Google, Yahoo, YouTube, and a few other companies you might have heard of.

UberTwitter is a popular Twitter client for BlackBerry devices.  It’s got all the basic Twitter features one would expect.  However, they have done a good job optimizing the user experience for BlackBerry’s small screen.  One nice option lets you reduce the size of profile icons, enabling users to fit more text on the screen.  The app supports multiple accounts, allowing each account to have unique on-device settings.  UberTwitter is free and supported by advertisements…although you can purchase an ad-free version for $4.99 (aka $5). 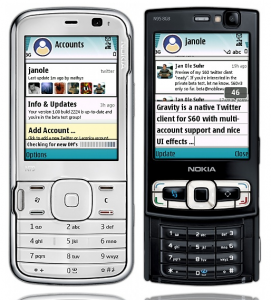 TinyTwitter is another popular Twitter app.  Like Snaptu, it supports Java enabled devices, meaning it is not just focused on the mobile bourgeoisie that own an iPhone.  As its name implies, it is lightweight, so it downloads and installs quickly.  It’s not the prettiest app available, and it lacks certain features such as as uploading images with tweets.  But if you are looking for a simple, get-to-the-point kind of Twitter client, then TinyTwitter is a solid choice. Search for the most reliable mobile applications for smart phones and increase your productivity.

10 thoughts on “Top 5 Twitter Apps for your Mobile Phone”